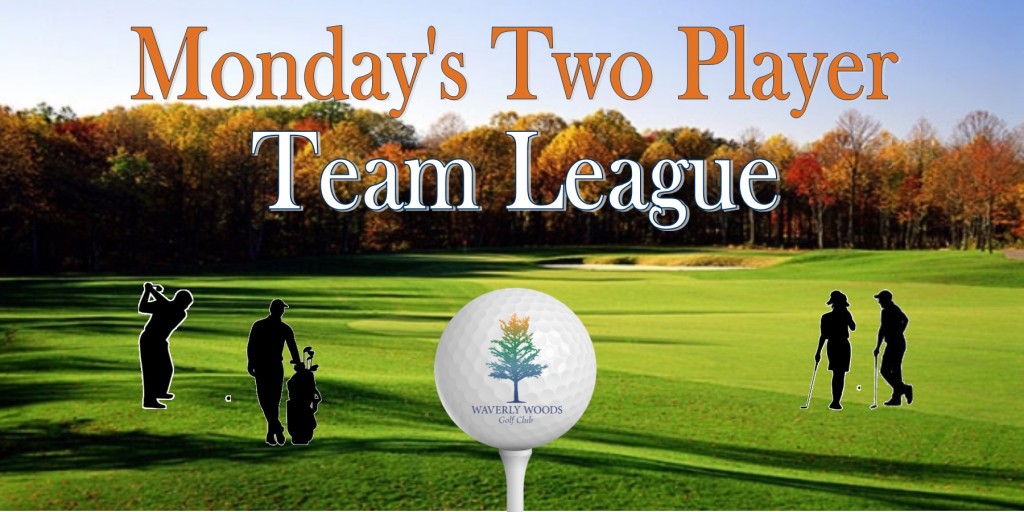 ~  Welcome to the 2nd Season of our Team League Championship  ~

Each week features a different format. Payouts (Gift Certificates) are based on how well teams do in each weekly format challenge. Teams also receives “Arthur Hills Cup” points based on their weekly (non-format) net score.  The top 16 teams with the most Cup Points at the conclusion of the regular season will move onto the Arthur Hills Cup Playoffs.

Each team member plays their own ball throughout the round. After each hole, the lower net score of the two teammates is the score that’s counted for that hole. The team with the lowest net best ball team score at the end of 9 holes wins.

Definition: Stroke play is a round of golf in which the score is kept by adding the cumulative total of strokes taken throughout the round. Your league handicap is subtracted from the total strokes to give a net score.

Definition: Disaster, a k a Trouble, is a points game in which the winner at the end of the round is the player (or team) that has collected the fewest number of points. That’s because points are “awarded” for bad shots. Hit a ball out of bounds, that’s a point. Points in Disaster can be given any value, and what earns a point can vary from group to group – it’s up to you. But a common point system is as follows:

Only strokes taken with a putter on the putting surface are counted. No handicaps are used to net down the number of putts made. The winners will be the player making the fewest (gross) putts.

Definition: On every course, there are a few holes that give every golfer trouble. The ones where, no matter how many times you play the course, you can never quite tame those holes. Don’t you just hate those holes? In Hate ‘Em, you get choose two of those holes and, before the round starts, write down a par on each. A stipulation is that the two holes must be comprised of one par 4 and one par 5. At the end of the round, add up the strokes (including the two pars on your Hate ‘Em holes), deduct your handicap strokes, and the low player (or group) wins.

Flags – also commonly known as Last Man Standing or Tombstone – is a competition format in which golfers begin the round of golf with an allotment of strokes, then play the golf course until their strokes run out. The game gets its name from the fact that little flags are usually given to competitors to stick in the ground at the point from which their final shot is played. The golfer who stakes his flag the farthest around the course is the winner. Example: Your allotment is 42 strokes. You play the course until you hit your 42nd shot, which, let’s say, comes on the 8th fairway. That’s where you plant your flag. If no other player’s flag is planted beyond yours – say, on the 8th green or 9th tee box – you are the winner. Flags will be played using your league handicaps to determine the stroke allotment. A player with a handicap of 6, for example, receives 42 strokes on a par-36 (nine-hole) course. Using handicaps often means that several golfers will reach the end of the 9th hole with strokes left; those players with strokes remaining can stop after 9 holes and the golfer with the most strokes remaining is the winner.

Is the name of a golf betting game for two teams of two golfers each in which a side’s scores are put together (or paired) to form a double-digit number, rather than added together. Don’t worry, it’s quite simple once you see an example. Winnings and losings can add up quickly in Las Vegas, which is often played for $1 per point, so it’s a game preferred by better (or at least wealthier) golfers.

How Teams Scores Work in the Las Vegas Format

The team’s two scores are not added together, they are put together or paired. What does that mean? Let’s say Golfer A and Golfer B form one Las Vegas team. On the first hole, A scores 5 and B scores 6. Add them up and that’s 11. But we don’t add up scores in Las Vegas, we pair them to form a new number. Put “5” and “6” together and you get 56. Fifty-six is the score for Team A/B on Hole 1. In Las Vegas, the smaller of the two scores goes first when forming the bigger number. In our example above, if A had gotten the 6 and B had scored the 5, the team score on that hole would still be 56, because the smaller number (5) goes first.

Here’s one of the exceptions we mentioned to putting the smaller number first. If one of the golfers makes a 10 or higher, the higher number goes first. This is good thing! If A scores 5 and B makes a 10, the team score is 105 rather than 510. This is a safeguard against the numbers getting out of hand.

Quota format involves individuals or teams starting with a certain number of points, based on handicap, then adding points for achievements on the course. Each golfer begins the match with points equivalent to their handicap, so a 3-handicap golfer starts with 3 points and a 10 handicap golfer starts with 10 points. The goal is to reach 36 points, which can vary in some tournaments to 39. Points are awarded to golfers based on performance on the course, and are awarded as follows:

Each players accumulates points using the following scoring format and then both players will combine their points to get a Team Total:

We require both the registration form & your online store payment submitted on the same day.

Fill out the online registration form below and proceed to step two.

Submit Payment. Click Here to be redirected to our Online Store and pay from the comfort of your own home. Loading…

and stay up to date on specials and events